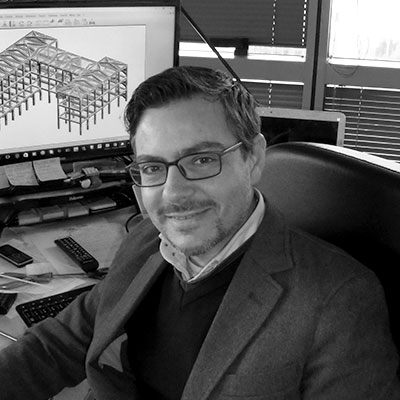 Civil engineer Alessandro Bianchi was born in Ancona on November 18, 1971.

After having followed a University study course centered on a project of building in seismic zone, he graduates in civil engineering in year 2000, with a thesis concerning a seismic adjustment of an already existing building damaged by the Umbria and Marche earthquake of 1997, with the system of seismic insulation at the base with a technique of retrofit.

In year 2005 he wins a tender of the Marche region as an expert in seismicity and he begins an external cooperation with the regional body as coordinate and steady flux of work.

Meanwhile working as freelance , in 2010 Alessandro opens a civil engineering company named ” GEA soc. coop. Seismic Risk Protection”. At present he is a Company’s legal representative ,sole administrator and responsible for the technical area made up of 4 engineers.

Always very interested in the prevention of the seismic risk , during the last 10 years he has been putting a particular attention in the seismic vulnerability of existing concrete buildings, in masonry and steel, of which he has become an expert.

He sit as a spokesman and lecturer at many engineering courses and seminaries organized by the Federation of Civil Engineers of the Marche Region and he realized some publications on specialized magazines, beside being coauthor of the books and scripts about seismic vulnerability.

He provided specialized counseling for various city councils, for the Marche region , he made various controls of property vulnerability for e- distribution ” an Italian electric energy company” , he tests seismic security of the main distribution hubs. He run a project of seismic adjustment of some building belonging to the Agricultural faculty at Polytechnical University of Marche , for the COOSs Marche, a leading coop company which runs many nursing homes, he provides consultancy and design always in the field of seismic security for buildings.

Particularly careful to the evolution and the upgrading of the innovative technologies in the strengthening of the existing structures, he dedicates a lot of his time to the research and to the deepening of whatever the market offers in terms of recovery techniques and seismic improvement of the buildings.

Concerning new building planning eng. Bianchi has designed projects for apartment blocks and cooperated with various working teams for the design of new structures ( including a multistory parking lot for an airport).
The specialization on seismic insulation and on dissipation of energy leads eng. Bianchi to offer this quake proof technology as a safety protection against earthquakes in the full knowledge that such a technology is the safest in the countries with high seismic risk.

I strongly believe to be a part of a designers team, made up by multidisciplinary and professionalism makes us proud and simultaneously draws in important responsibilities facing arduous, but inviting challenges.

The chance to design buildings for foreign countries presumably with building traditions different from our own represents a unique experience in it’s kind that creates positive feelings and motivations. It is a great chance to be useful and to grow own skills, putting in disposal our knowledge and receiving a fabulously cultural enrichement.